As we approach the mid-way point of Championship week, and with the Major Conference Tournaments swinging into gear today its time to take a fresh look a the field and figure out how many at-large bids remain available and identify how many teams are left competing for them.

Here is the breakdown of where the field stands, through games played on Tuesday, March 10th.

Field Construction and definition of terms used in 'Bid Math': 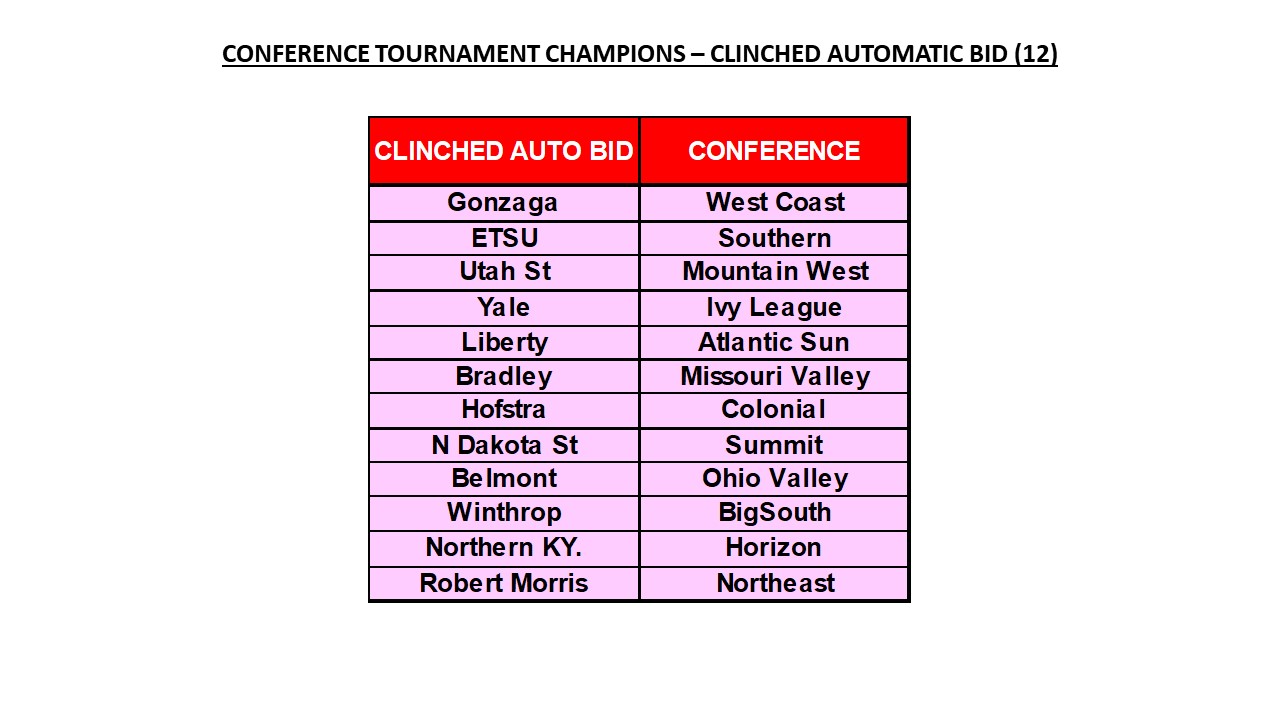 Status of Current Conference Leaders
The teams below are currently leading their conference.  They are broken down into 3 Groups: 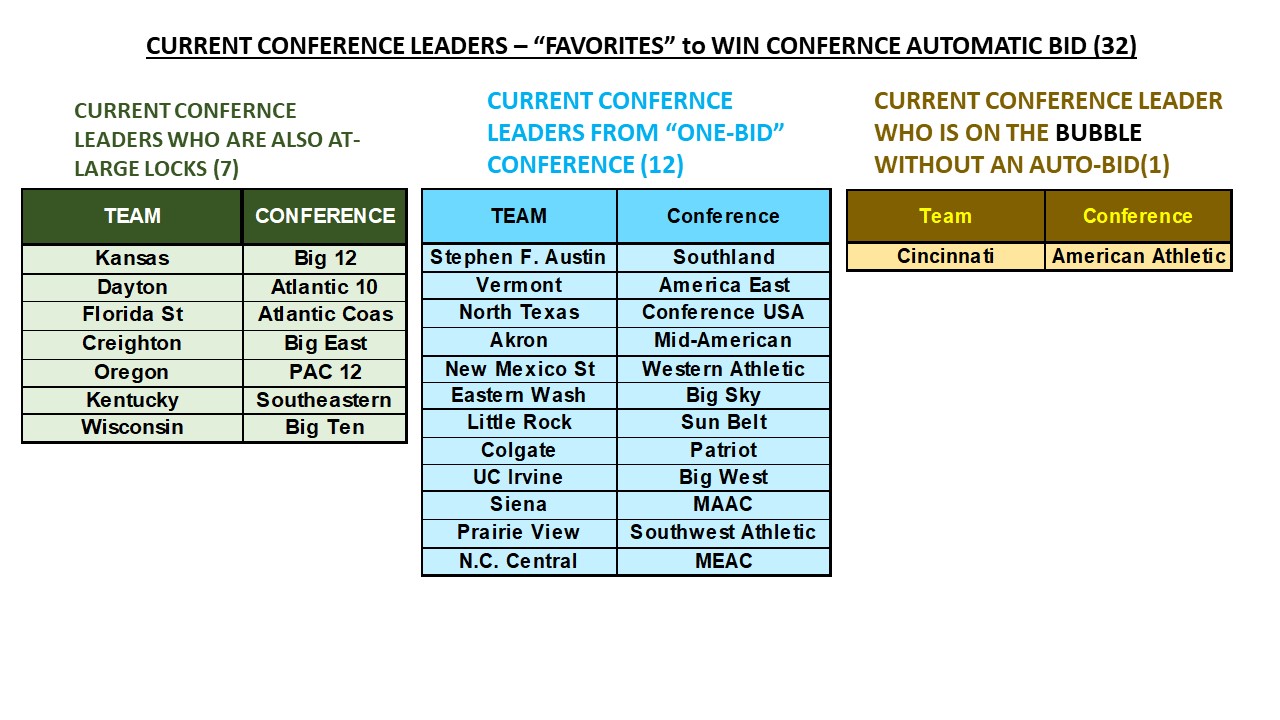 The teams below are currently not leading a conference.  They have done enough to guarantee being selected as an At-Large Team even if they don't win their conference's Automatic Bid 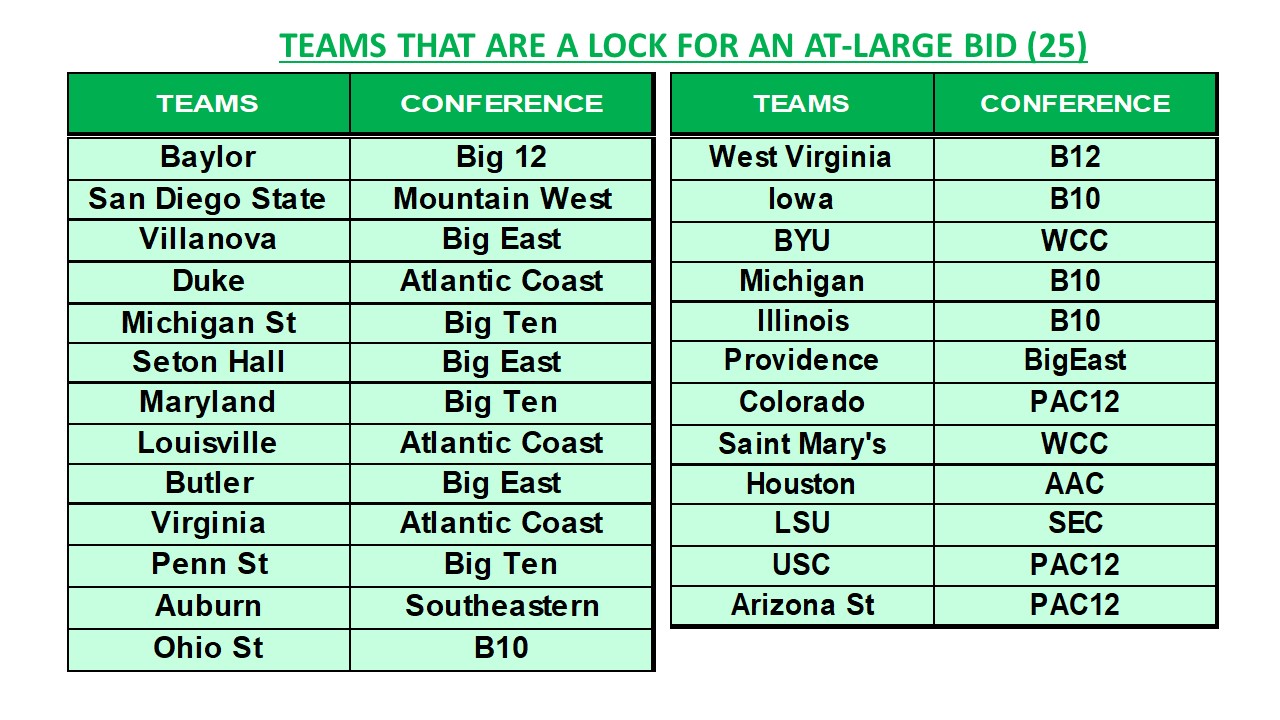 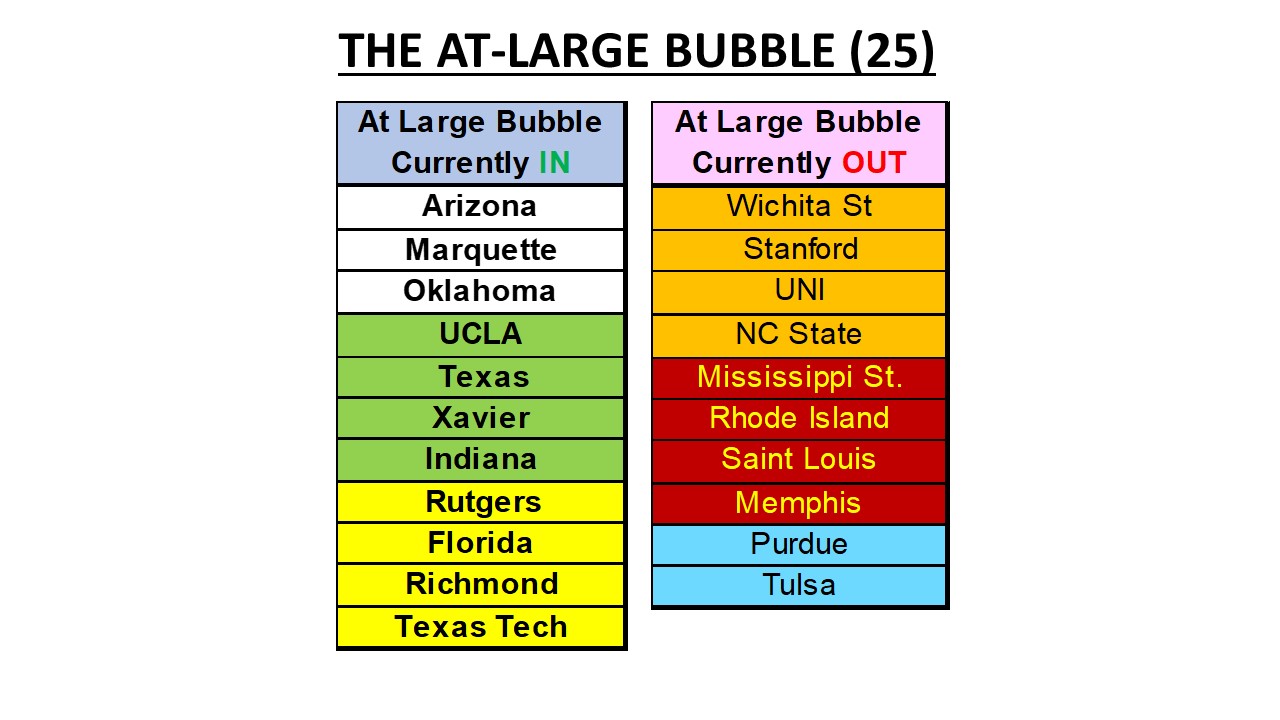 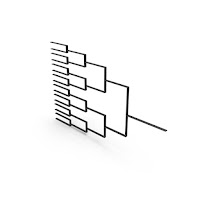 Here is a full update for games played through Tuesday, March 10th. 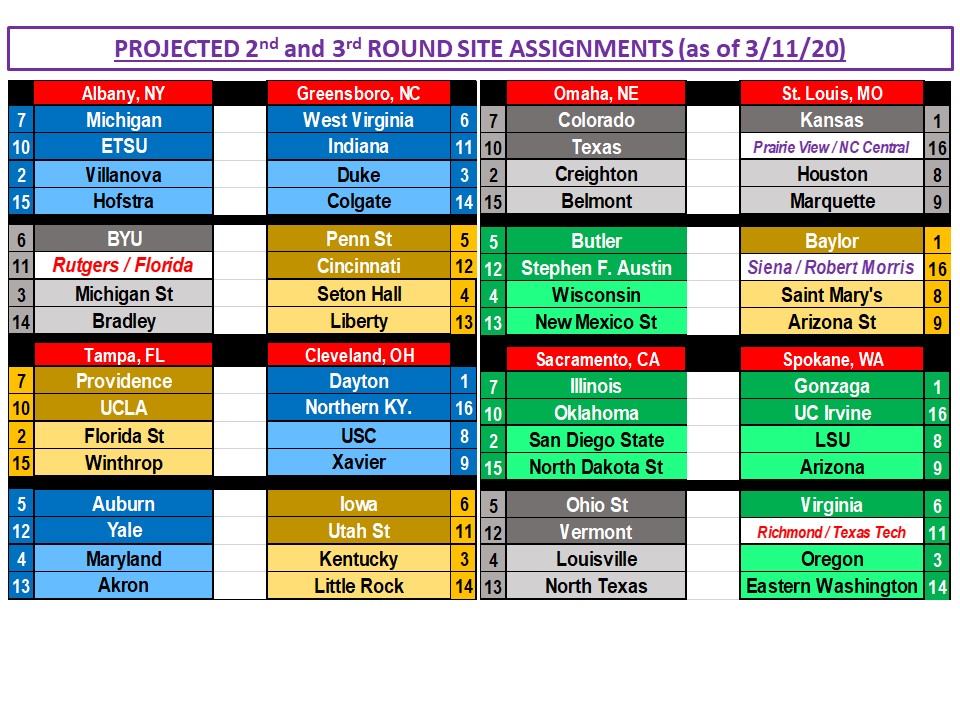 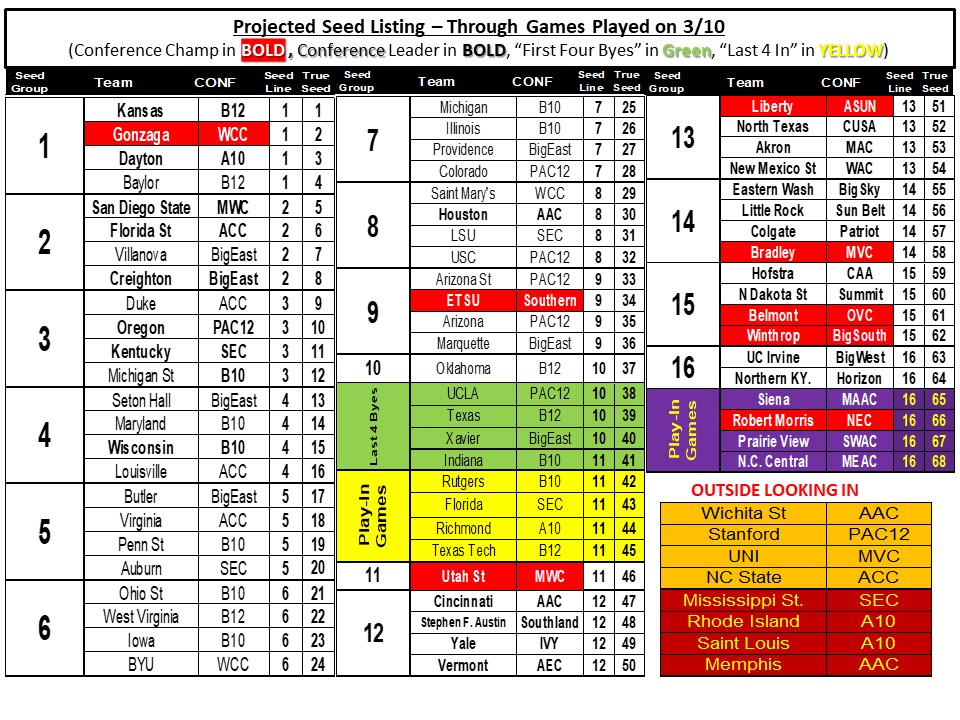 Teams highlighted in RED have won their conference tournament and clinched an Automatic Bid. 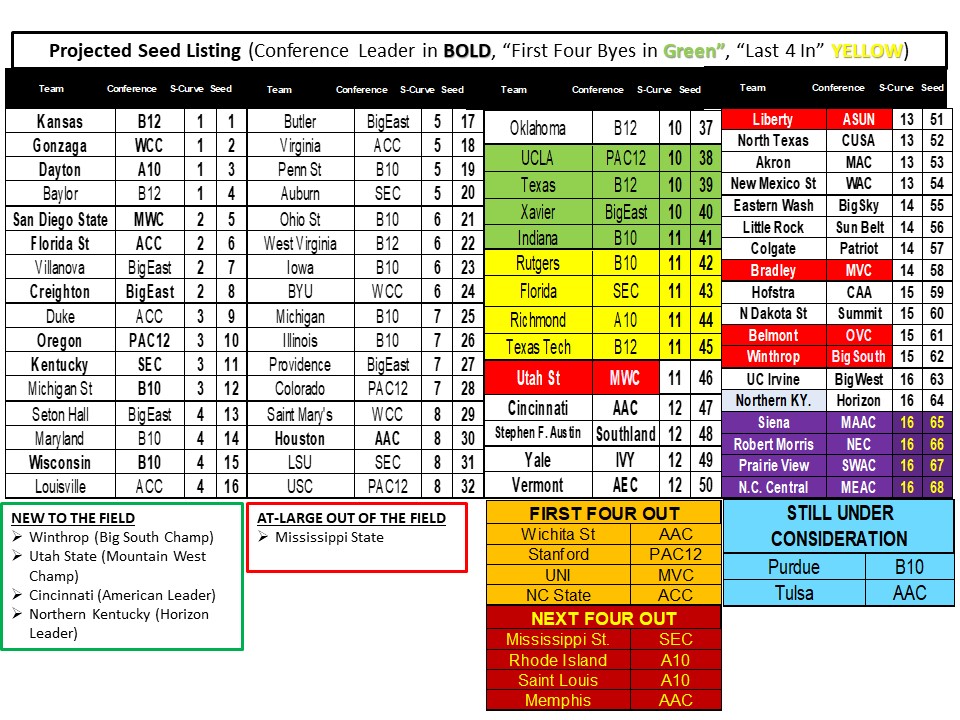 Two SEC teams have come off the board as teams under consideration for an At-Large with losses in early Saturday action.

Next, South Carolina falls on the road to Vanderbilt.  The loss is their 3rd Q3/4 loss of the season, drops them to 18-14, and to .500 in the SEC.  Just too many teams on the bubble with better resumes ahead of them.  In the unlikely event they manage to beat Tennessee and Auburn en-route to SEC Championship game we can talk.  Reality is though, that not likely to get both of them before a title game.
Posted by TD at 2:09 PM No comments:

At lot at stake in this one.  Utah State is technically on the bubble, but on the outside looking in.  A loss and they are no longer under consideration for an At-Large.  In reality, this makes them a potential bid thief as San Diego State is currently locked in and sitting on the 1 Seed line.  If Utah State wins, the likelihood for SD State to stay on that #1 seed line falls is dramatically diminished.  If the Aztecs prevail, it may be enough to lock a #1 Seed down

Winner gets the Auto-Bid for the OVC.  If Belmont loses, they get auto bid to NIT as Regular Season OVC Champ.

Biggest games of the day involving at least one team locked in as an At-Large qualifier.  Outcome likely to impact NCAA seeding of team(s) playing, as well as seeding in each team's respective Conference Tourney.

Biggest Games involving at least 1 Team considered to be on the bubble today.  Bubble Teams are in Bold. Teams with locked At-Large bids highlighted in yellow.

Conference tournaments already underway produced results yesterday that has changed the complexion of the field since yesterday morning.  This update reflects those changes.

Most notable was Northern Iowa's (UNI) blow out loss in the quarterfinals of the Missouri Valley Conference (MVC) tournament.  With that loss, UNI is eliminated from contention for an Auto Bid, and now can only qualify with an At-Large Bid.  I still have them in the field as of this morning, as one of the Final Four Bye's.  A closer examination at my next full field scrub with updated data from the NCAA could change that.  Of course there is a full slate of action involving the bubble teams below them as well over the next couple of days that could also squeeze them closer to the cut line.

The significance of their loss is that it presents the arrival of the first potential bid thief which would shrink the size of the bubble.  If UNI had won the MVC Auto-Bid, they would have been the only team to qualify from the conference.  However, with the continued inclusion of UNI as an At-Large team, the MVC would be assured of two bids, and thus would reduce the number of at-large bids available by one.

This update reflects that scenario.  Bradley is now included in the field as the leader of the MVC by virtue of it being the highest seeded team remaining in the MVC tournament field (4th).  2nd seeded Loyola-Chicago was also eliminated yesterday as was 3rd Seed Indiana State.   As an aside, the MVC tournament is one of my favorites, and has produces huge upsets almost every year, as well as teams that spring upsets in the NCAA.  Recall Loyola-Chicago's remarkable run to the Final Four in in 2018 as just one example.

With Bradley now occupying a second MVC bid in my projection, Mississippi State, who was the last team in on my seed list yesterday has been squeezed out, and now resides as first team out. 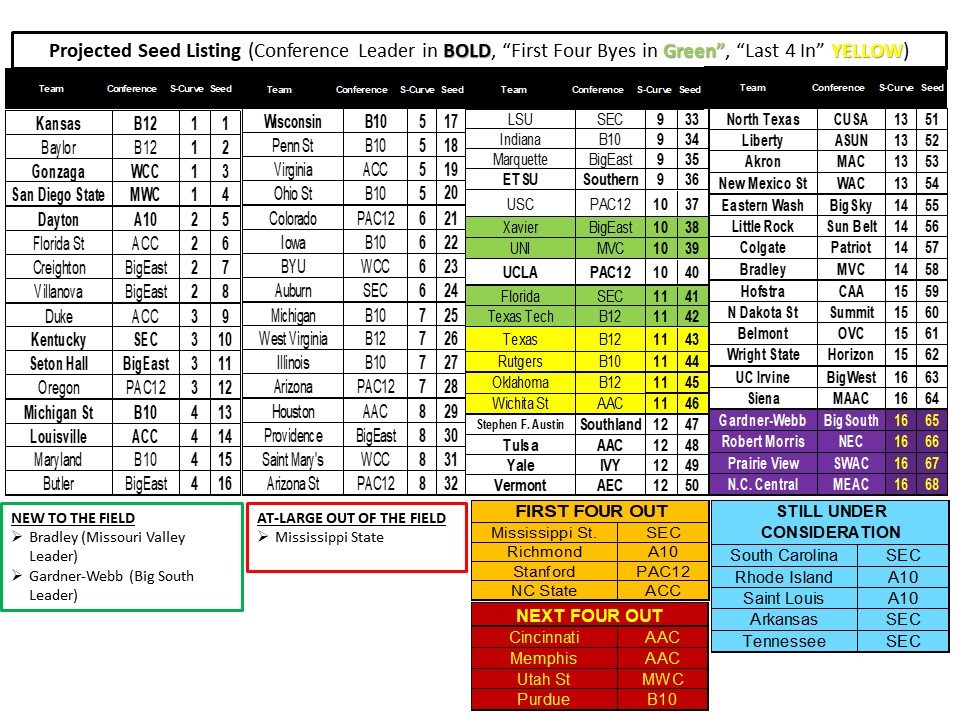 What to do with Rutgers ... 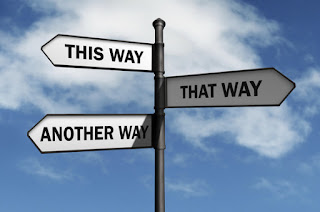 Each NCAA Tournament Selection year presents the Selection Committee (and by extension, "bracketologists") with a team or two that can be very difficult to assess in comparison to the rest of the at-large field.  Usually they are teams on the bubble, and how the Committee sorts it out sometimes sets something of a precedent for future selections.

This year's candidate for most unusual resume', at least in my book, is that of the Rutgers Scarlet Knights.  I've been doing this for many years now, and I don't ever recall ever coming across one quite like the one they have assembled this year.  As a result, trying to figure out how the Committee will view them begs the question 'What to do with Rutgers'?

At first glance Rutgers has a strong resume' for an at large team.  The metrics rankings suggest a team that would get seeded safely in the field around the 7-9 seed line.  They have a NET Ranking of 31, Predictive Metrics Ranking Average of 31.3, and strength of record of 38.  Additionally, they own a Non-Conference strength of schedule (NCSOS) inside in 100 (out of about 350) where they won 8 of 10 games.  They have 4 Quad 1 wins, and 8 combined wins among Quad 1 and the top tier of Quad 2.  They are guaranteed to be no worse than .500 during the Regular season playing in arguably the country's best conference, top to bottom.  Taking these metrics and comparing them to those of the 2019 At-Large teams selected, this compares very similarly to Iowa, who finished 10-10 in the Big Ten, had a NET Rating of 40, predictive metrics average of 37, had 4 Quad 1 wins, and were 9-10 vs. Quad 1 and top tier of Quad 2.  That Iowa team was ranked 37th on the committee's final seed list and earned a 10 seed, several positions above the last 4 byes ... in other words ... safely in.   If anything, Rutgers high level measurements are better than Iowa's.  On the surface they would appear to have already locked a bid.  However, on my seed list I have them as one of the last 4 teams in, and hanging on by thread!

You see, this Rutgers team presents a very interesting wrinkle in their resume' that varies dramatically from Iowa a year ago.  While Iowa demonstrated they were capable of winning away from Iowa City by going 6-7 in Quad 1 and 2 games away from home, Rutgers has won exactly ZERO such games this season.  Despite 18 wins, and nearly half of them against teams with NET ratings no worse than 54, not a singe one has come away from Rutgers home gym.  Rutgers is a shocking 0-9 against Quad 1 or 2 teams away from home.  They have just 1 road win the entire season!  That came against Nebraska who has won just 7 games this season and hold a NET Rating of 193.  If you can't win away from your gym, its hard to convince the selection committee you could do it in a Tournament against Quad 1 and 2 level talent where every game is away from home.

The fact is, I don't recall ever seeing a resume' in which an at-large contender did not have a single road or neutral court victory to at least one of the top 190 teams in the country, as measured by the NCAA's primary ranking tool.   I went back and looked to see if I could find a comparable in team in terms of road/neutral futility in recent years and could find only one remotely comparable team.  There was no other team even close at least in the last 5 seasons.  Only one was even in the neighborhood.  In 2017 Syracuse entered Selection Sunday squarely on the bubble.  2017 was before the NCAA started using either the NET Rankings as its primary sorting tool, or grouping wins and losses based on Quads so an apple to apples comparison is difficult.  However that Syracuse team entered selection Sunday with just a 2-11 record away from home and none of them came against teams ranked in the RPI Top 50, which is roughly comparable to today's Quad 1 + Top Tier of Quad 2 groupings.  That team was left out of the field, most likely for Kansas State who was 9-8 away from home.  Of those 9 wins 5 were against the RPI top 50.  This despite the fact that Syracuse had more wins against the RPI Top 25, 50 and 100 than K-State.  Hard to imagine that road record was not a huge part of the calculus to take K-State instead of Syracuse.

The comparison isn't perfect.  Syracuse carried a poor 200+ NCSOS and an RPI of well over 80.  Those are (or were in the case of RPI) numbers that no doubt contributed to being left out of the field.  As noted, Rutgers carries a very good NET (which replaced RPI) and reasonably strong NCSOS that is going to offset the poor road record to some degree.  How much is the part that is difficult to predict, precisely because we haven't seen a team with a resume' quite like Rutgers in some time, if ever.

My gut feeling is that if Rutgers fails to pick up a Q1 or Q2 Road or neutral win before next Sunday, they won't get in, and it won't really be all that close.  Getting only 1 may not even be enough.  The committee has consistently emphasized that demonstrating the ability to win away from home, which all NCAA Tournament games obviously are, is a factor in the selection and seeding processes.  Rutgers current level of futility in this area appears nearly unprecedented among tournament at-large teams in at least the past 5 years.  Tomorrow's game  at Purdue (NET 32) gives Rutgers perhaps their last chance at a Quad 1 road win (and a top tier of Q1 at that).  A loss tomorrow could be fatal for Rutgers, unless they can string together a couple Q1 and/or Q2 wins in the Big Ten Tournament.  Even at that, they are likely to be right on or very near the cut line.

If I'm wrong, it may be an indication that the NET and Predictive Metric rankings carry more weight than actual game results with this particular committee.  If that's the case, several other teams with strong NET rankings but light in wins in some other measurable way, may secure seedings that are higher than teams with similar profiles that have come along have in the past.